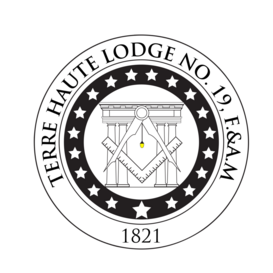 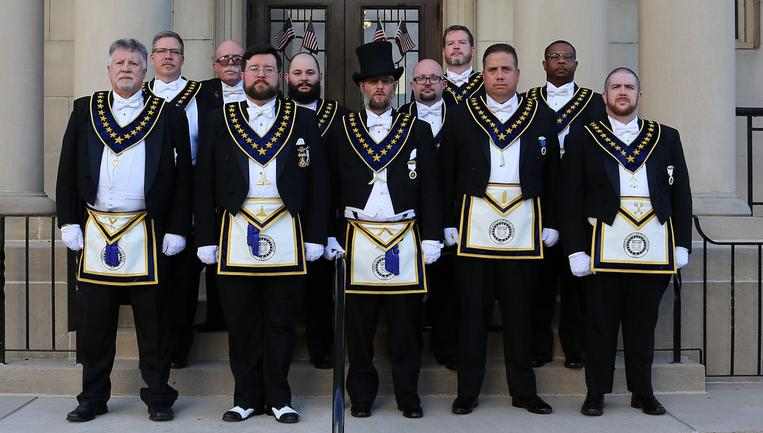 Worshipful Brother Ethan is serving in the East of Terre Haute Lodge No. 19, F. & A. M. for 2023, where he is the 142nd unique Master of the Lodge. Ethan has been a member of Terre Haute Lodge since 2017, when he transferred from Social Lodge No. 86, F. & A. M., also in Terre Haute, where he was raised in 2012.  Ethan works as the General Manager of Paitson Brothers Heating & Air Conditioning in Terre Haute, and holds Bachelor of Arts Degree in History and Political Science from Purdue University. With his wife, Danielle, Ethan has two sons and one daughter. Ethan is active in the community as the President of the Vigo County Youth Soccer Association, a lifelong member of Terre Haute First Baptist Church, and an avid supporter of special needs programs including Autism awareness.

The Worshipful Master may be contacted at: wm@terrehaute19.com 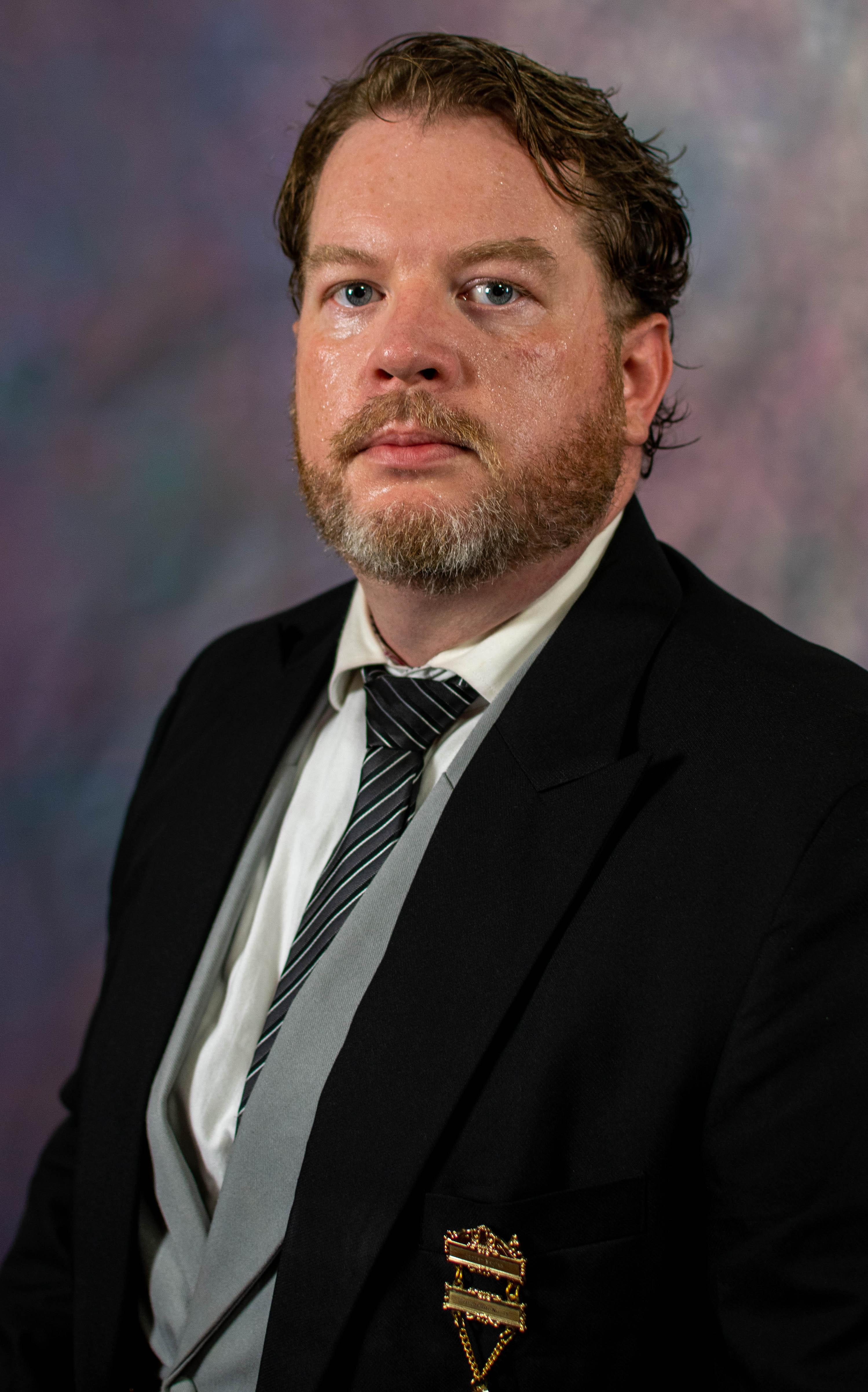 W. Bro. Jordan was the 138th unique Master of Terre Haute Lodge No. 19, F. & A. M., having served in 2015.  For 2023 he is serving Terre Haute Lodge in the West. Terre Haute Lodge is the home Lodge of W. Bro. Jordan, having been raised in 2010. Jordan works as a Cook Foreman for the Federal Bureau of Prisons, and holds several professional culinary certifications including Certified Executive Chef & Certified Culinary Administrator with the American Culinary Federation, and Certified Dietary Manager/Certified Food Protection Professional through the Association of Nutrition & Food Service Professionals. Jordan holds an Associates Degree in Culinary Arts from the Culinary Institute of America, and a Bachelors Degree in Business Management from Western Governor's University.  Jordan is married withs one daughter and enjoys traveling, dining at fine restaurants, and taking in stage performances.

The Senior Warden may be contacted at: sw@terrehaute19.com 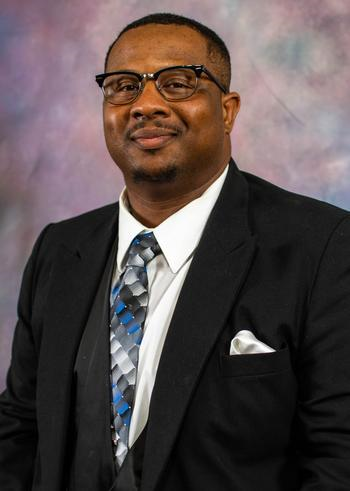 Bro. Walter is serving in the South of Terre Haute Lodge No. 19, as Junior Warden, for 2023. Brother Walter was raised in No. 19 in 2019.  Walter is employed as a Cook Foreman by the Federal Bureau of Prisons.  Walter is a husband, and father of four children, and in his free time enjoys spending time with his family, being on the lake, and helping coach youth sports.

The Junior Warden may be contacted at: jw@terrehaute19.com 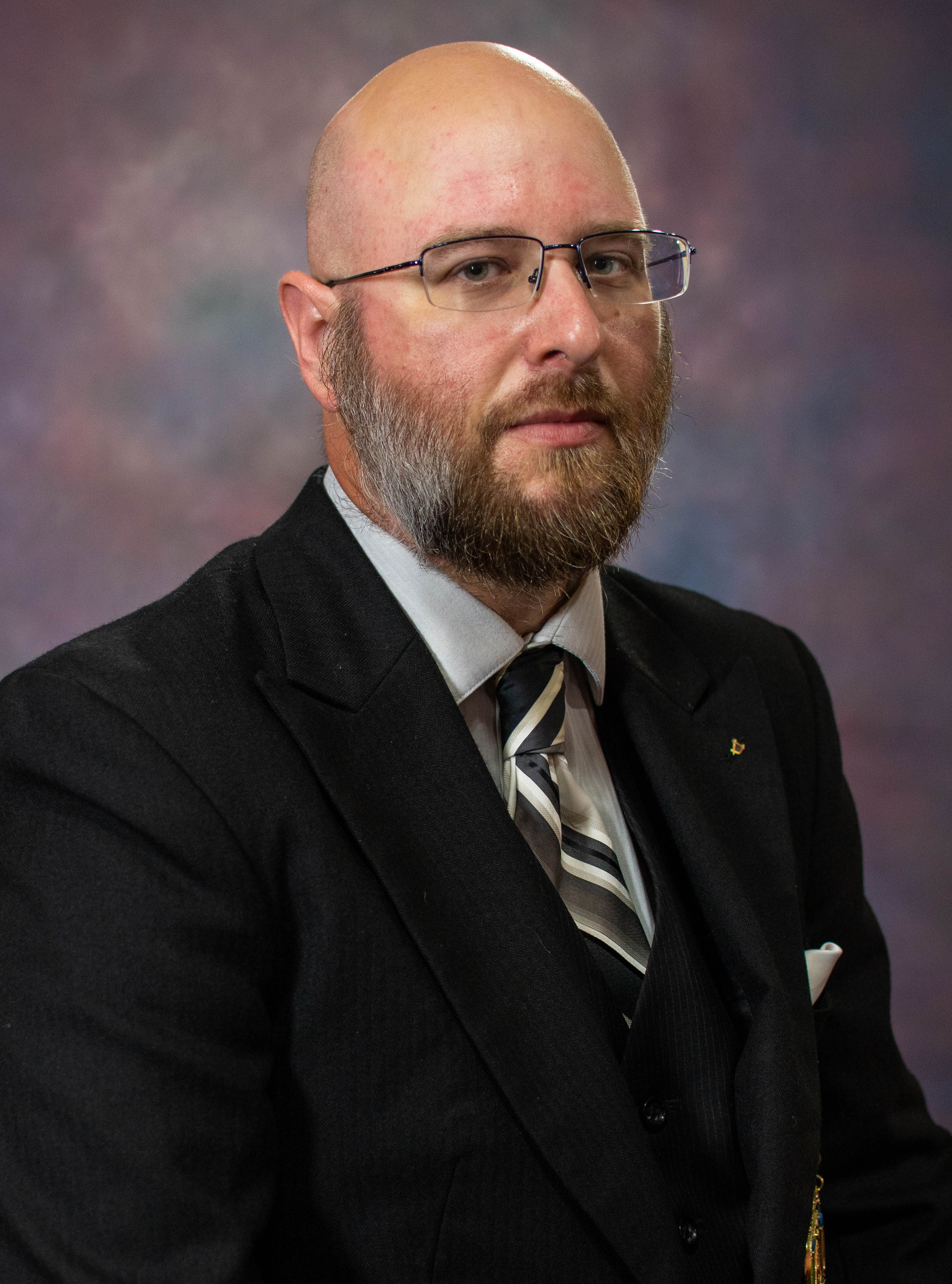 W. Bro. Ian is the 139th unique Master of Terre Haute Lodge No. 19, F. & A. M., having served in the East in 2016, 2019, 2021, and 2022.  This year will mark Ian's first year sitting behind the treasurers desk. Terre Haute Lodge is the home lodge to W. Bro. Ian, having been raised in 2008.  Ian is a letter carrier with the United States Postal Service by day and moonlights as a trombone and tuba player for the Lafayette Citizen's Band, Marshall City Band (IL), Terre Haute Community Band, ISU Concert Band, and Bill's Bones (Trombone Choir).  A collection of Ian's musical abilities can be found on his YouTube channel.  Ian holds a Bachelor's Degree is Music Education from Indiana State University, and a Master's Degree in Music Performance from Ithaca College.  Ian is the proud father to one son.

The Treasurer may be contacted at: treasurer@terrehaute19.com 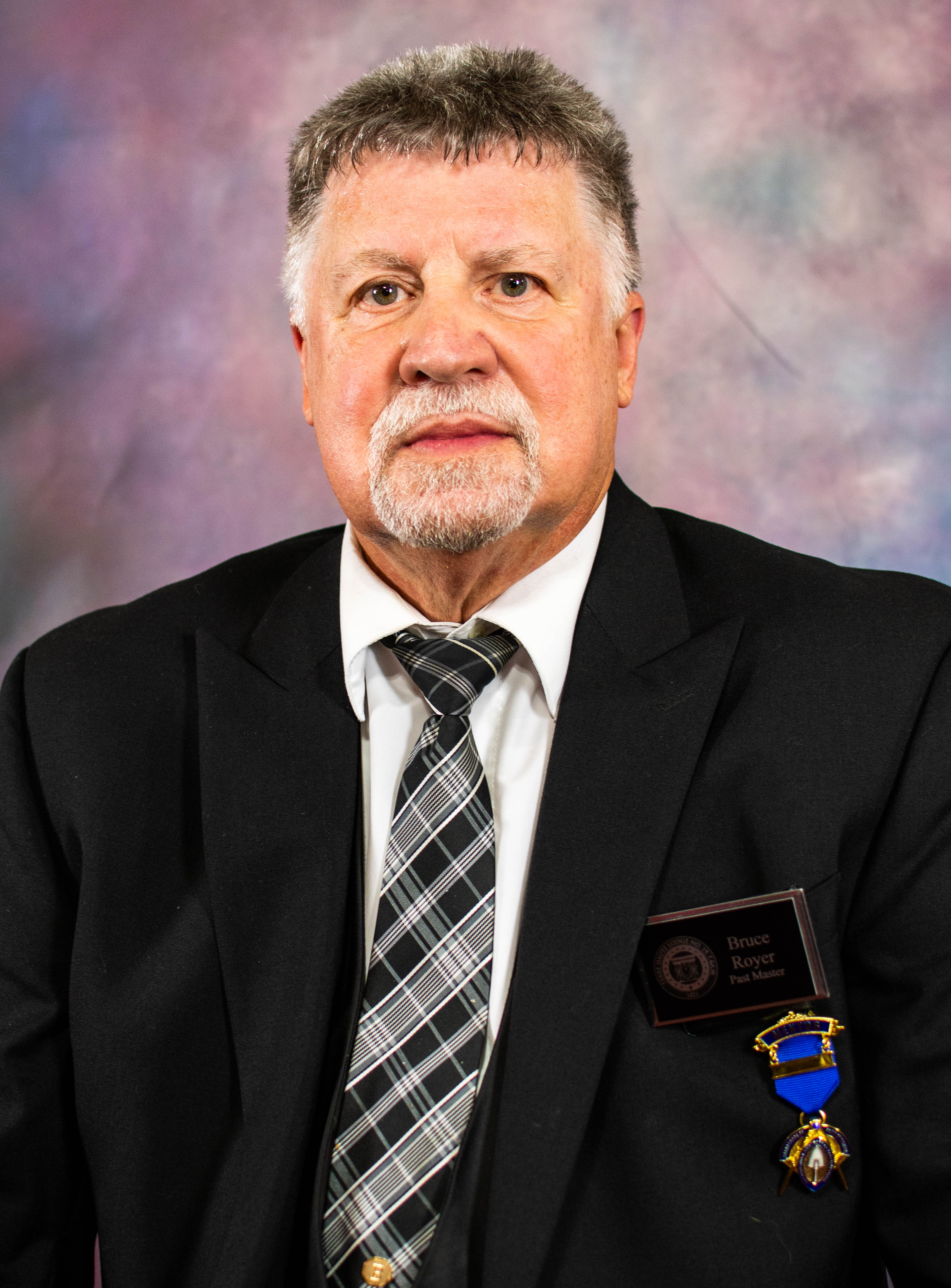 W. Bro. Bruce was the 134th Unique Master of Terre Haute Lodge No. 19, F. & A. M., serving in the East in 2007.  Bruce has served Terre Haute Lodge faithfully as Secretary since 2014.  ​Terre Haute Lodge is Bruce's home lodge, being raised in 1976.  Among many other Masonic accomplishments, Bruce is a 33rd Degree Scottish Rite Mason (class of 1987) and a Past Potentate of Zorah Shrine (2004), Grand Steward and Tyler (2007), and the Ambassador from the Grand Lodge of Indiana to the United Grand Lodge of Germany (2008-Present). While stationed in Germany in the United States Army, Bruce met his lovely wife Gisela and they, together, have 2 daughters, 4 grandchildren, and 1 great grandchild.  Bruce retired from Eli Lily Elanco Labs in Clinton and Gisela has since kept him constantly busy with home renovation projects.  Bruce has picked up a retirement career as an actor working with Dreams Come True Productions on movies to include: Guilty (2012), Smoke & Mirrors (2013), Vanished (2014), My Mother's Replacement (2015), The Promise (2017), A Second Chance (2018), and The Text (filming).

The Secretary can be contacted at: secretary@terrehaute19.com 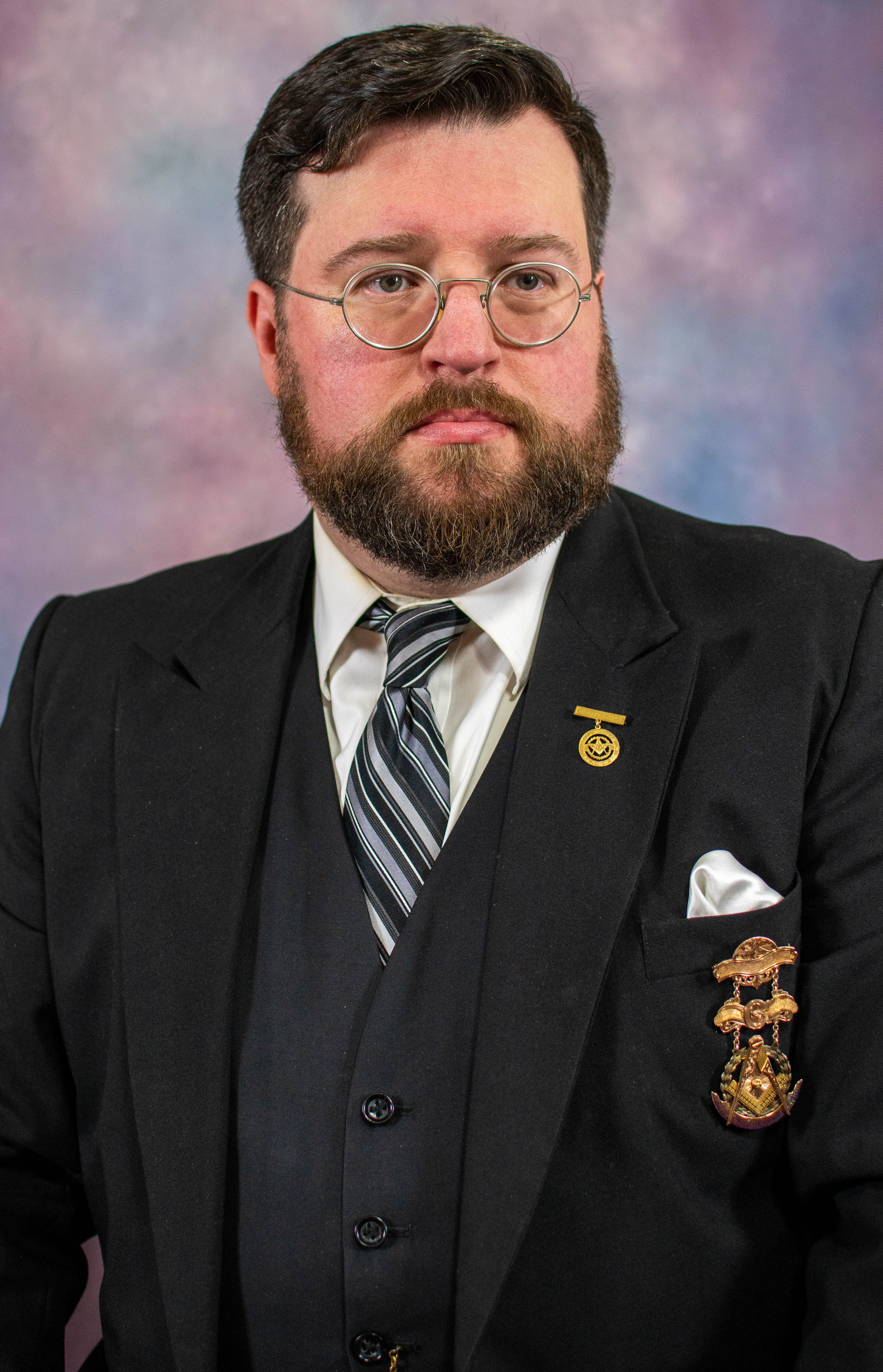 W. Bro. Matt was the 137th unique Master of Terre Haute Lodge No. 19, F. & A. M., having served in that position in 2013, 2014 and 2017.  Before becoming a plural member at Terre Haute Lodge in 2009, Matt served in the East at his home Lodge, Riley Lodge No. 390, F. & A. M. in 2004, where he was raised in 2000.  In 2022 Matt was awarded the Order of Service to Masonry by the Grand Lodge of Indiana at its Annual Communication. Matt is also a Charter Member of Double Eagle Lodge No. 773, F. & A. M., serving as its Worshipful Master in 2021. Among many other Masonic memberships and accolades, Matthew is currently serving as an officer in the Grand Chapter, Royal Arch Masons of Indiana, and is a recipient of the Knight York Cross of Honor, the Order of the Purple Cross, and the Knights Templar Cross of Honor.  He has also served as the Commander-in-Chief (2021-22) of the Indiana Consistory, Valley of Indianapolis AASR, and is a Grand Lodge of Indiana Ultimate Master Ritualist.  In 2015, Matt was named a Worshipful Master Emeritus of Terre Haute Lodge No. 19, as well as Ambassador to the York Rite Soverign College of North America. Matt was awarded the Order of Service to Masonry (OSM) by Grand Master Daniel L. Martin at the 2022 Annual Communication of the Grand Lodge of Indiana. Matt holds a Bachelor's of Science Degree in Anthropology from Indiana State University and a Master's of Philosophy Degree in Historic Archeology from the University of Cambridge.  In his non-Masonic free time, Matt enjoys woodworking and turning, having made custom gavels for many of the Master's of Terre Haute Lodge.

The Assistant Secretary can be contacted at: asstsecretary@terrehaute19.com

Bro. Mike had the honor of being raised to the Sublime Degree of a Master Mason on the 200th Anniversary of the Lodge's Charter, September 13, 2021.  Mike served in the United States Army in Field Artillery from December 1995 to September 1999, and then Military Police from September 1999 to October 2003. and afterward started a career with the Federal Bureau of Prisons, where he now works as a Material Handler Foreman for Federal Prison Industries (UNICOR), and is also a Trustee for the Employees Club at the Federal Correctional Complex in Terre Haute. Mike is a proud parent of two boys and in his free time enjoys spending time with family and traveling.

Bro. Frank is serving Terre Haute Lodge No. 19,​F. & A. M. this year as the Junior Deacon, and was raised in Terre Haute Lodge in 2021. Frank is originally from Dayton, Ohio and works as a Service Manager at Paitson Brothers Heating and Air Conditioning. Previously, Frank worked in corrections, serving on a member of the Special Operations Response Team for Corrections Corporation of America (now CoreCivic).  Frank is married with four children and enjoys hunting, fishing, and camping with his family.

W. Bro. Chris was the 141st unique Master of Terre Haute Lodge No. 19, F. & A. M., serving in that role in the year 2020, and has since served the Lodge as the Tyler.  Chris transferred into Terre Haute Lodge in 2014 after being raised in Social Lodge No. 86 earlier that year. Chris received a Bachelor's Degree in Information Technology from Indiana State University in 2014, and currently works as a System Administrator at Rose-Human Institute of Technology.  Chris and his wife Emily have one daughter, and he enjoys board games, acting in stage productions at the Community Theatre of Terre Haute, tending to his honey bees, and spending time with his family.

Bro. Cody has joined his father, Bro. Frank Patterson as a member of Terre Haute Lodge No. 19, F. & A. M., having taken his Master Mason Degree in 2022. Cody is serving his home Lodge as at the Senior Steward this year, after a few months filling in as Junior Steward in 2022. Cody works in the Information Technology field currently working for Joink Trusted Technology Solutions.

Bro. Zellers is serving Terre Haute Lodge No. 19, F. & A. M. as the Junior Steward for 2023. David is returning to the officer line after a work induced hiatus, last time rising to the office of Senior Warden. David currently works as a Commissary Specialist for the Indiana Department of Corrections, and is studying X-Ray Technology at Ivy Tech Community College. 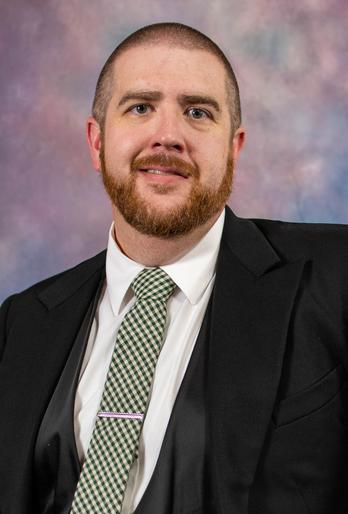 W.Bro. Chris was the 140th unique Master of Terre Haute Lodge No. 19, F. & A. M., having served in that capacity in 2018.  W. Bro. Chris came to Terre Haute Lodge in 2015, after having served as Master (2014) at Centennial Lodge No. 541, F. & A. M., in Brazil, IN, where he was raised in 2009. Chris works as a Special Investigative Services Technician for the Federal Bureau of Prisons and holds a Bachelor's Degree in Criminology from Indiana State University. Chris is the father two two wonderful children and also enjoys volunteering with the Boy Scouts of America, for which he is an Eagle Scout.